Cloud computing sales people claim their cloud is always on. But this isn’t exactly true. The modern data­cen­ters of today will work with  SLA’s to up to five nines which is very impres­sive (see chart) but 99.999% SLA doesn’t mean your server will always be on.

To achieve this five nines SLA for power our data­cen­ters use redundant links to the power grid, 2N battery backups and N+1 generator backup’s. They have huge tanks to fuel these gene­ra­tors and deals with two different companies from two different countries to guaranty refueling.

But sometimes even this kind of far going measures are not enough. An Amazon cloud computing data­center with a primary, backup and secondary backup still expe­rienced downtime due to cascading failures.

And that’s only power. Then there’s cooling, hardware failure, network failure, software failure, updates gone bad, viruses. There are a lot of things that can go wrong. Off course the data­center is only respon­sible for the first two. This means your SLA says the power and the cooling will go to your server for 99.999% of the time. If your hardware vendor guaran­ties five nines too, the combi­na­tion of power, cooling and hardware just adds up to 99.998%. This still doesn’t take into account software which is most prone to failure. 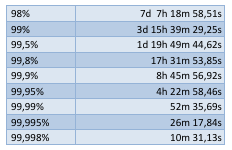 And SLA’s are not necessary met. An SLA just says you will get a certain percen­tage of you money back if they fail to do what they promised you. Because these agree­ments can cost your data­center a great deal of money they will do every­thing in their power to meet them.

Now we are still talking about failures that last less than 15 minutes per year. That means less than 15 minutes in entire year, 24/7 including Christmas, New Year and Easter. So if you’re running an exchange server that’s only down for 15 minutes with a good chance no one is working on that moment you can say you are doing your job pretty well.

Sometimes making the right choice in this matter can be hard. Because the data­cen­ters all have different terms and condi­tions therefor you have to be very careful you are not comparing apples and oranges. If you are a demanding person/company you will need to make the right choices to get the most out of your budget. Therefor making the right demands and choose the best partners seems not as easy as it looks. And if things really go wrong you will mostly only find out when it‘s already to late! Making mutual consulta­tions and sound agree­ments are key to prevent the downsite of a SLA breach. 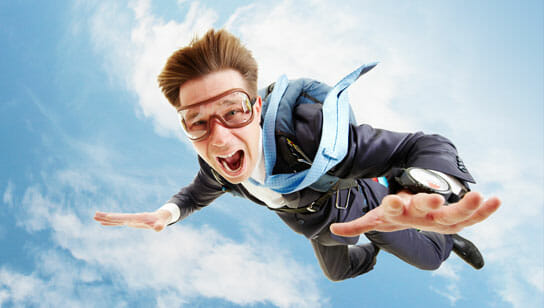